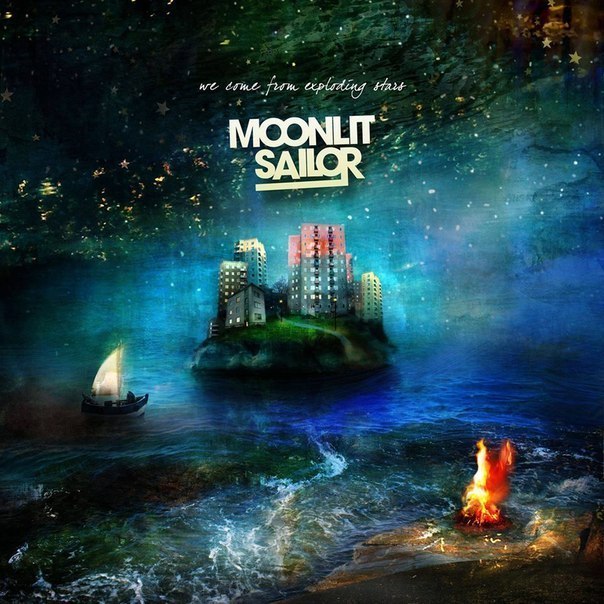 Album: We Come From Exploding Stars

If you were to imagine that Explosions in the Sky were to make a record heavily influenced by and the emo and indie pop scenes, We Come From Exploding Stars from Swedish post-rock band Moonlit Sailor would probably be that album.

The best way to describe the quartet’s fourth album, released through indie label Deep Elm, is “post-rock with pop sensibilities and hooks”. Heavily syncopated, unique guitar melodies separate We Come From Exploding Stars from the vast majority of it’s contemporaries. The guitar melodies have a vocal quality that almost seem to have you making up your own words to go along with them. While it would be a stretch to call any of the songs “danceable”, don’t be surprised to find yourself being easily moved along and enjoying the rhythmic landscape that comes with and compliments the emo and pop influenced melodic elements on the album.

A great example of this can be found the track “From Gemini to Lynx”. The palm muted guitar intro, utilizing plenty of syncopated delay, sounds like something The Edge could have written, before it opens up and the drums come in to really make you bob your head. Another example is “Dollar Underwater”, which starts off with a solo drum intro that can best be described as “bouncy”.

Compared to their previous albums, Moonlit Sailor have come a long way. Whereas the group’s first full length, A Footprint of Feelings, consisted of several songs that felt like statements half made and abruptly cut short, there is a definite conclusion to each song on the band’s newest effort. The only possible exception is the album’s closing track, “A Century Under the Influence”, which introduces new melodic material shortly before the end of the track, then seems to abruptly end on it. This feeling of inconclusiveness could be simply because if there is one thing Moonlit Sailor has become exceedingly proficient at, it is avoiding typical “crescendocore” traps and cliches by writing both songs and albums with a gracious ebb and flow to them. So it’s possible that I was just expecting one final triumphant passage before the album came to a close. Or perhaps I just didn’t want the album to end.

The one thing you will come away with from We Come From Exploding Stars is melody. Throughout their four full lengths the band have gained a well trained ear for writing hooks without the need for vocals. The progression, even noticeable from 2011’s excellent Colors in Stereo, is something I hope to hear more of in the future from Moonlit Sailor. Because honestly, it’s working for them, and it’s working for me.

We Come From Exploding Stars is available now through Deep Elm’s site and, like the label’s entire catalogue, is available at “Name Your Own Price.” Give it a listen, and if you dig it throw some money at them.

Off Brand Products No. 1

So, obviously I’m a human and I like a variety of human things. Those human things happen to include music that extends beyond the intended scope of certain blogs that certain humans may have started which pertain to a certain genre of... Continue →