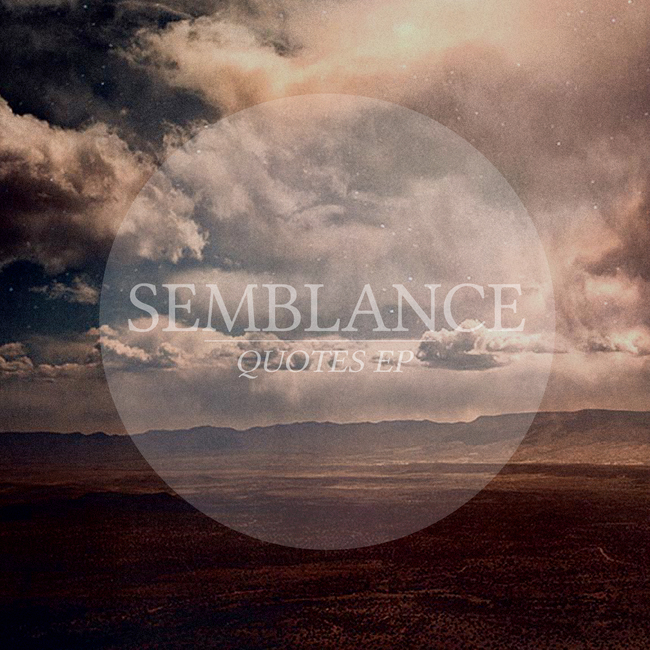 There is something to be said about reinventing the wheel. And that is, honestly, maybe you don’t need to. Given you’re fully capable of producing a really good wheel in the first place, that is. That’s exactly what Oklahoma City’s Semblance have done with their debut release, the Quotes EP.

The five piece borrow heavily from their influences, which include such mainstays of the scene as Explosions in the Sky and Caspian. But if imitation really is the sincerest form of flattery, Quotes would make Texas four piece This Will Destroy You blush. If you’re a fan of TWDY, and still waiting for a new studio album to follow up 2011’s Tunnel Blanket, OKC’s Semblance might definitely be something worth checking out to tide you over in the meantime.

It’s a fair statement to say of the 5 songs on the 27 minute EP, there isn’t a single throwaway track. One standout is “My Soul Is In The Sky”, which may partly be due to me being a such a sucker for glockenspiels and sleigh bells. However, the following track, “This Moment Will Just Be Another Story Someday”, is where Semblance show the most promise. The track starts out with a plodding bass riff and dirgy tom filled drum line that would sound comfortably at home on a Mogwai record, while also hearkening back to the likes of Splint and June of 44. By the time you reach the absolutely soaring conclusion of the track, it has morphed into something entirely, but also wonderfully different from where you started out. If this is an indication of where the band is heading, I can’t wait to hear a full length from them.

Don’t expect Quotes to shake up or redefine the post-rock genre by any means. More importantly, though, definitely don’t consider that a bad thing. Semblance are not another Explosions or TWDY clone. They have something positively their own to offer the landscape of the genre. However, the bottom line is all the tracks are stellar, which I honestly can’t say about some of my favorite records from more well known and better established bands.

It’s worth occasionally being reminded that constantly chasing the next big new thing can cause us to miss out on the many good things happening in the present. Semblance are one of those good things not to be overlooked, and their debut EP promises growth in all the right directions.

You can download Quotes EP through Semblance’s Bandcamp by naming your own price. And if you can help it, don’t be that guy, and show em some (monetary) love.