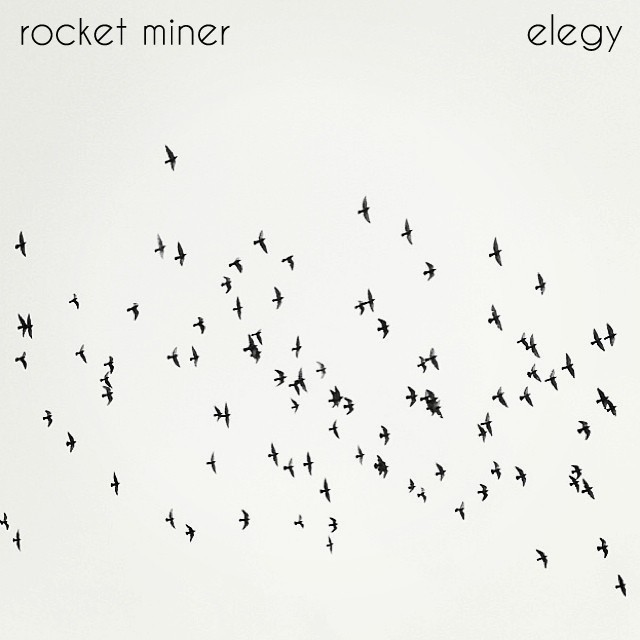 Coming from the same city that’s home to two post-metal heavy hitters, Russian Circles and Pelican, Chicago’s Rocket Miner have carved a decidedly non-metal niche for themselves within the scene. Their new record, Elegy, is drenched in a shoegazy aesthetic. Solid, but honest production, heavy fuzz, and spindly, clean guitars offer something a little on the lighter side of the genre. I should emphasize, though: a little. This album still rips, and it is by no means quiet.

Perfect examples of this are “And They Can Never Truly Die”, “Captures (The Day)” and the hardest hitting track on the record, “War Room”. From start to finish, the track just absolutely pummels you with sound. All of this cacophony is followed by “Jejune”; a plodding, contemplative track that leads into “Memories Are All We Have Left”. A lone guitar melody starts the track before being joined by drums and a bass line reminiscent of Mogwai’s “Yes! I Am A Long Way From Home” before bringing the fuzz. It ends with a clean guitar riff that just oozes a sincere 90’s nostalgia and melancholy. A sudden drum hit is the wake up call that starts “Catalyst”, which foreshadows what it easily the most impressive drumming on the record.

While I loved the heavier tracks on this record as well, the next track has surprisingly become my favorite on the record. “Ember” doesn’t break away from the typical soft-to-loud dynamic, so much as it flips it on its head and turns it around. And it works incredibly well. After the fuzz from the first half of the song breaks, it becomes a quiet, almost emotionally ambiguous tune. Along with clean guitars, the track contains a young girl’s voice as well as her briefly playing a harmonica, all drenched in reverb and far away from the listener. Ranging from bittersweet, to reminiscent, to playful, to absolutely heartbreaking, Rocket Miner manage to use such a wide brush that they’ve painted a track that will almost certainly mean something vastly different to each listener. The album wraps up with “Bemoan”, which ends somewhat abruptly and unresolved, which is fitting, really, for a closing statement to an album called Elegy.

Where Rocket Miner really stand out, not only from their hometown contemporaries, but in the genre as a whole, is their ability to write songs that don’t adhere to some of post-rock’s more tried and true characteristics. Elegy is an album that abstains from typical crescendocore cliches and needless repetition of ideas that don’t offer any real progress. Everything on this album feels like it is meant to be where it is. And it all sounds really, really good.

Elegy is available now through Rocket Miner’s Bandcamp for $7. They hope to release it on both CD and vinyl in the very near future.

I mentioned in my introduction that I wouldn’t be posting negative reviews on PostInTheName. My justification when I wrote that was, and still is, that I don’t see a point in maintaining a blog with the purpose of telling people what not... Continue →